Of Marriage and Divorce: The Negative Impacts of Divorce to Society

When couples get married, no one, especially not them, expects that their happy relationship would end in divorce. But sadly, a huge portion of marriages do end up in divorce.

Although divorce is culturally prevalent in the country, we cannot deny the fact that it still has a significant negative impact on society as a whole. Divorce not only affects couples and kids, but it also affects the economy and the workforce.

Undergoing a divorce can be stressful for everybody. If you and your partner are contemplating filing for a divorce, take time to read the negative implications of divorcing and talk to a reputable divorce mediator.

The Negative Impacts of Divorce

Impact on the Economy

There are a lot of economic disadvantages of divorce, from personal down to the national level. Accordingly, the common belief that the higher the divorce rate is, the stronger the economy becomes is not true.

The surge in divorce naturally leads to a surge in the number of households. This would mean that the number of resources being used, such as electricity and gas, also increases. Such being the case would lead to a decrease in the economic growth rate.

Furthermore, studies have shown that divorce and separation cost taxpayers over $112 billion per year. The legal process of divorce not only is cumbersome but is in itself costly, especially if there are settlement agreements involved.

In addition to such facts, both men and women are significantly impacted financially by divorce. Although divorced women and their children are more likely than divorced men to receive government assistance, the standard of living of the former decreases.

The negative implications of divorce reach far beyond finances. Various studies have shown that men and women who have undergone divorce are more likely to suffer from various physical and mental health problems.

Whether the party has initiated the divorce proceeding or not, any couple undergoes these problems, especially during the earlier stage. Divorced couples often experience depression, lower life satisfaction, increased stress, and other emotional problems.

In developed countries, divorced men and women have twice the premature mortality rate of married couples. In most divorce cases, both men and women are reportedly more prone to catching colds and flu. Chances of having cancer and heart-related diseases also increase due to divorce. 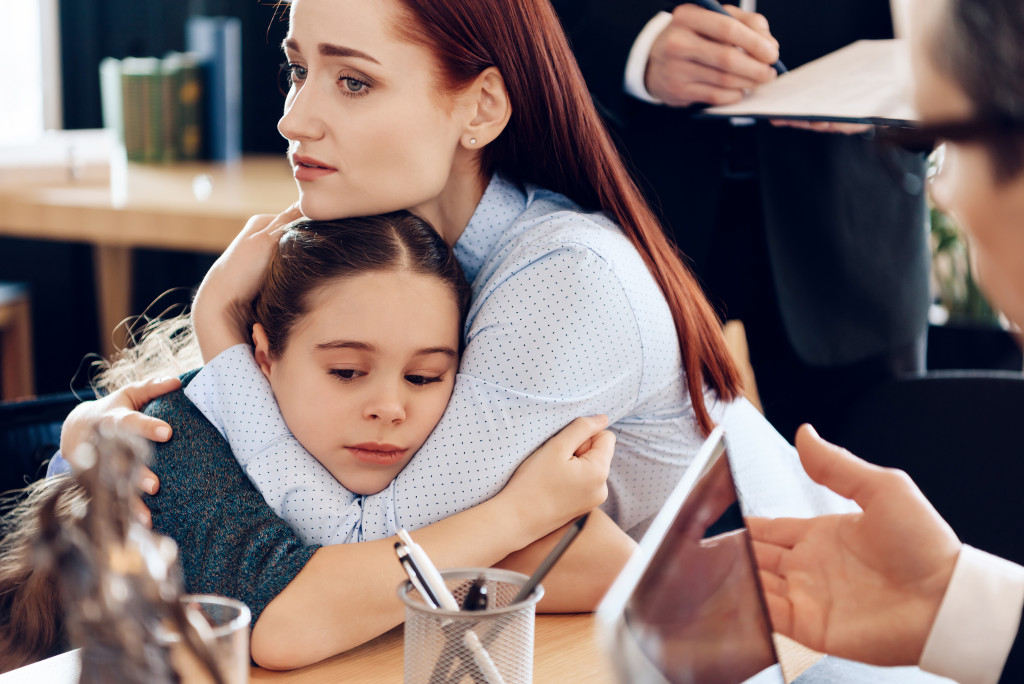 The effect of divorce on children varies as it would depend on how old the children are at the time of the divorce. Though infants and toddlers experience the least effects from their parents’ divorce, many reportedly have appetite suppression and moodiness.

Children three years old and above experience more difficulty adjusting to the new family dynamics and are more prone to the belief that they might have caused their parents’ divorce. And, pre-adolescent and teenagers are likely to act out in anger and suffer from depression and other mental health issues.

These are some of the common negative effects of divorce on children:

Trying to understand the shift in family dynamics could leave children feeling distracted and confused. Such interruption could further interrupt their academic performance since they cannot give the same attention as before with all-new emotions and family arrangements they have to process.

Divorce can bring up a lot of emotions for everyone. Children are no exception. The different emotions, including anger, confusion, feelings of loss, and anxiety, could leave children feeling overwhelmed and emotionally sensitive.

With no one to talk to, children could resort to means which might be harmful to their well-being, so they could express their thoughts and feelings.

During these difficult times, children all the more need someone ━ a friend or any dependable adult ━ whom they could confidently talk to and help them process their emotions.

Children are often left wondering why their parents are divorcing. They will always look for reasons, and most often, they would think they are the cause of the divorce.

Without providing context and counseling, children of divorced couples are often left feeling guilty. This feeling of guilt could lead to several issues later on, including depression, stress, and other mental health concerns.

Divorce could impact the workplace as well. Workers undergoing divorce are likely to have higher levels of absenteeism, stress, anxiety, and health issues. These would further lead to decreased work performance and productivity. With a distracted and depressed employee, the employer’s cash flow is severely impacted.

This list is not meant to deter you or make you change your mind or your decision, but it is for you to prepare yourself for any consequences of divorce that you would have to face along the way.